Archaeological evidence indicates that the shores of Tampa Bay were inhabited by indigenous peoples for thousands of years.

During the first few decades of the 20th century, the cigar-making industry was the backbone of Tampa’s economy. The factories in Ybor City and West Tampa made an enormous number of cigars—in the peak year of 1929, more than 500 million cigars were hand rolled in the city.

During the 1950s and 1960s Tampa saw record-setting population growth that has not been seen since. This amazing growth spurred major expansion of the city’s highways and bridges, bringing thousands into the city. It was during this time period in the city’s history that two of the most popular tourist attractions in the area were developed – Busch Gardens and Lowry Park.

With its perfect mix of historic architecture and modern landmarks, Cuban and Spanish culture-infused flavor, vibrant business districts and beautiful waterways, Tampa is a wonderful place to work, play and unwind.

Its downtown has come alive in recent years with more urban parks, including the gorgeous Tampa Riverwalk, more hip bars and innovative restaurants and amazing restorations to turn-of-the-century buildings.

For residents and visitors alike, there’s no shortage of things to do in Tampa, whether it’s paddling along the Hillsborough River, sampling tequila at a margarita festival, enjoying a pro football or hockey game, riding a thrill-coaster at Busch Gardens or attending an opera at the Straz Center.

Tampa is known for being a great city for all ages and tastes, offering hotel accommodations that fit any budget and catering to everyone from the families to outdoor adventure seekers to foodies and wine connoisseurs. Once known as a melting pot for all cultures and settlers, Tampa remains a welcoming place for those seeking fun, opportunity and a chance to try new things.

While it’s only a short, 30-minute drive to the beaches, Tampa’s real strengths lie in its city life.

Nearby Hyde Park, an upscale shopping and dining district, there are boutique stores and national brands, as well as excellent restaurants and bars. But one of the great things about Tampa is you can venture outside of the urban, metro centers to find plenty to do off the beaten path. Rent a kayak or stroll the trails among serene surroundings, encountering beautiful Florida birds, pop-up turtles, lazy gators and the occasional manatee. 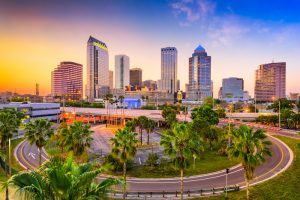